Our programs have helped thousands of people build the confidence and skills necessary to return to school, return to work, or start a business. 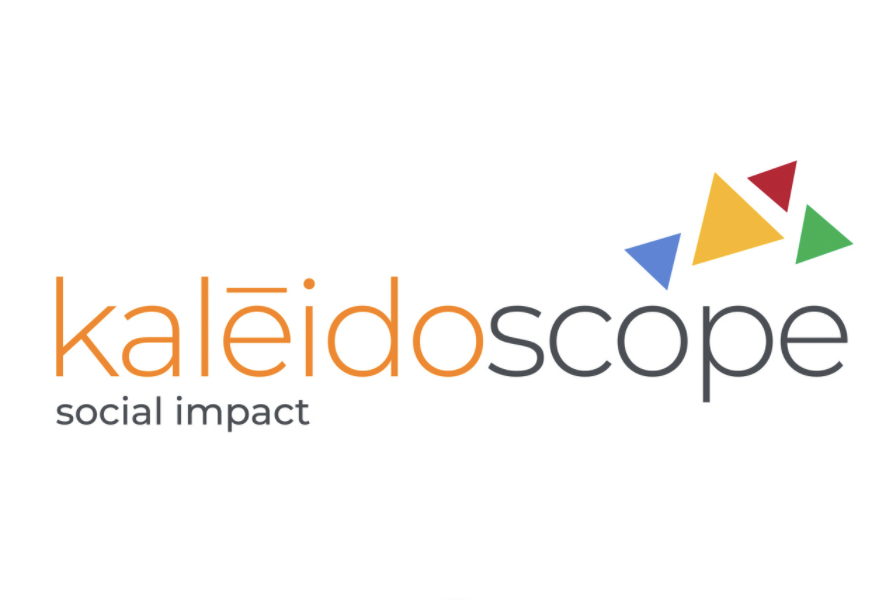 "kaleidoscope" is derived from the Ancient Greek word καλός (kalos), "beautiful, beauty", εἶδος (eidos), "that which is seen: form, shape" and σκοπέω (skopeō), "to look to, to examine", hence "observation of beautiful forms."

Our mission is to  help  individuals and organizations attain greater self-reliance.

We value community growth over profits. We develop delivery models that ensure our programs are responsive and impactful with clear mechanisms to be shared throughout New Brunswick. By focusing on regional growth, we foster partnerships and funding opportunities throughout the province that enable communities to deliver new programs and services. 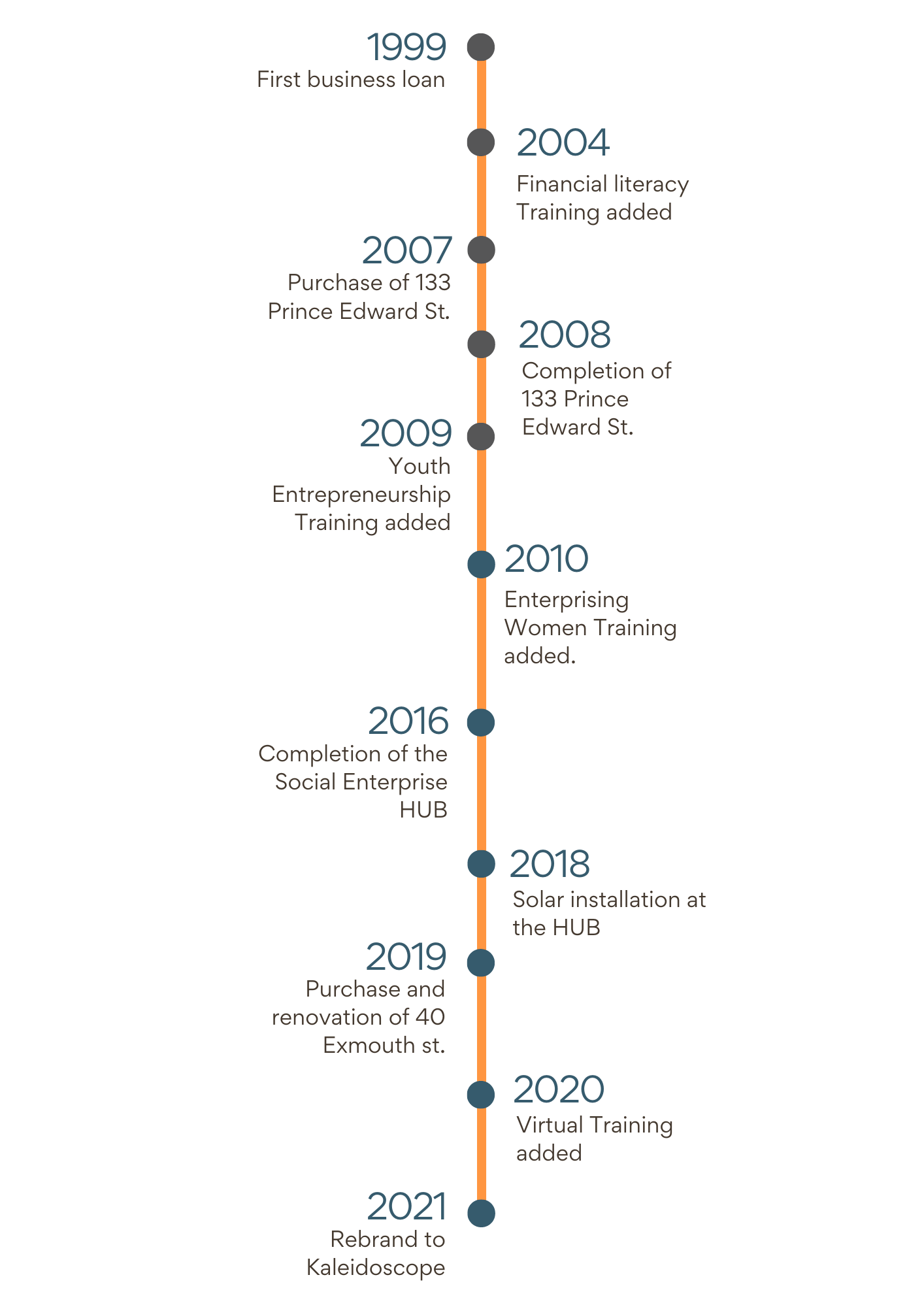 The Idea 1996: The Saint John Community Loan Fund began as an idea in 1996 at a meeting of the Urban Core Support Network. The individuals around the table spoke of the need for community credit. Credit that helped people living on low income start a business or get back to work. The idea stuck, and within months the Human Development Council conducted a feasibility study and wrote a business plan that showed there was a market and an opportunity to establish a community loan fund in Saint John.

Saint John had a poverty rate of 27% at the time, the highest in New Brunswick. With this knowledge and the will to make a difference, volunteers began to recruit investments to build the loan pool. Presentations were given at galleries and in office boardrooms, and within three months the loan pool was ready. Dorothy Dawson was the first individual investor at the Loan Fund. Her reason for investing, "I've been fortunate, so it makes sense to put something back." She represents the classic Loan Fund investor - compassionate and practical.

The Saint John Community Loan Fund made its first loan in September 1999. The first loan was a nail biter, with the volunteer loan committee deliberating over two separate meetings to tie-up their first "risky" loan. It was for $5,000, and it was to a company, a one-man show, that salvaged sunken logs from the bottom of the Saint John River. The loan was a success, with the loan being paid back and the borrower going on to develop another business that continues to contribute to Saint John.

The Saint John Community Loan Fund was incorporated as a non-profit corporation in April 2000 and received its charitable tax status from Revenue Canada in April 2003. It continues to be an innovator, being the first and only community loan fund in Atlantic Canada, joining approximately forty other micro-credit organizations across the country. All risk capital (loan and reserve) comes from community investors and donors, with a diversity of funding sources meeting operational needs.

In 2003, the Loan Fund confirmed its Vision, 'to be an innovative community lender, responding to local needs, with sufficient resources to help individuals build self-reliance through a variety of financial tools, and to provide an effective vehicle for Saint John citizens to invest directly in their community.' The Loan Fund started with back to work loans and business loans in 1999. In 2003, the damage deposit loan was added in response to a priority stated in the 2000 Community Plan. Training in financial literacy and business plan training were added in 2003 as well.

In 2004, the Loan Fund served as the Atlantic Regional Coordinator for the Canadian Community Economic Development Network and led the attempt at developing the Canadian Community Investment Network. In 2006, Seth was co-director of the Atlantic Social Economy Research Project. And in 2013, he co-chaired the Social Enterprise Committee as part of the Economic and Social Inclusion Corporation's Poverty Reduction Plan.

We started delivering Money Matter$ in 2004 after realizing that loans are not a magic bullet, people needed the right skills to manage money to pursue their goals, and ultimately build a better future for themselves and their families. We deliver most of our financial literacy training through a partnership model, inserting modules into other training offered by partner organizations. We also work with our partners to develop material for specific needs, for example: low literacy learners or a kitchen based program mixing budgeting and cooking, and Mo Money Mo Fun for Crescent Valley Youth.

IN 2007 we were hired by the Urban Core Support Network to create and then facilitate Power Up, a leadership training program for women facing significant barriers to work. The Loan Fund delivered Power Up for seven years before the Women's Empowerment Network (formerly Urban Core Support Network) took over its delivery. In that period 227 women graduated from Power Up. Unique about the program was using the sustainable livelihoods asset model, as well as neighbourhood days, in which women went into their neighbourhoods to identify the assets there. The program continues to grow, and the Loan Fund and the Women's Empowerment Network continue to partner.

In 2010 Enterprising Women began after receiving a five year funding grant from the Canadian Women's Foundation. as well as support from the Women's Issues Branch of the Provincial Government. Enterprising Women was offered twice a year and included 20 weeks of training, meeting twice a week and then once a month. The program saw more 100 women take the program and 60 launched businesses. Enterprising women continues today with support from the Women's Equality Branch, and we are working on recruiting another funder so we can continue to deliver eW which is always in demand. Have a look at the success stories. To register for the program click here.

SPRE refers to property and facilities owned and operated by mission-based organizations and investors for the purpose of community benefit, and to achieve blended value returns. Our vision is to continue to find opportunities to build SPRE either on our own or by assisting others to do so.

From 1999 until 2007, the Loan Fund shared space with the Human Development Council above the Saint John City Market. By 2008, both organizations had grown in staff.  A pitch was made to the the Board about purchasing a building. Management felt it important to walk the talk we gave to clients, "to create income, build assets and become more self reliant".  An angel investor heard the pitch, and provided the leverage to buy 133 Prince Edward Street;  a three unit building, with a ground floor pawn shop and two abandoned apartments above. Located in one of Saint John's Priority Neighbourhoods and only two blocks from the city centre, it was an ideal location.   With additional funding from the Province's Rental Rehabilitation Assistance Program and the Regional Development Corporation, plus sweat equity and a Bayview mortgage, 133 Prince Edward became our home in 2009.

Learn about the HUB here.